There are more well-travelled TV presenters than Simon Reeve – but not many.

And so, when the man who has brought us shows from the Americas to Russia, around the Equator and the Tropics of both Capricorn and Cancer pauses to reflect, “this is as beautiful as anything I have seen, anywhere on the planet”, we should probably pay attention.

“It is one of the great wonders of the country,” he adds with a passion.

He is talking about the Lake District in Cumbria, almost 1,000 square miles of national park attracting around 20 million visitors and day-trippers a year.

But few have gone with such a determination to immerse themselves in the World Heritage Site – quite literally when he goes wild swimming – and find the hidden stories behind the picture postcard views.

On his Visit to Honister Simon explored the working mine with Prentice and Nelly and discovered the techniques of old on how to split a clog weighing 7 tonnes. He learned how modern equipment has changed the way we mine today and how tourism has supported the diversification here at Honister into a new and exiting place for visitors to come to.

We’re looking forward to THE LAKES docuseries tune in to catch it on BBC2 or later on BBC iPlayer. 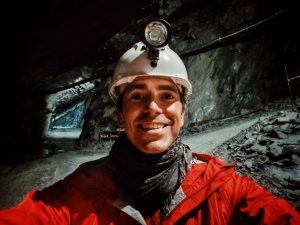