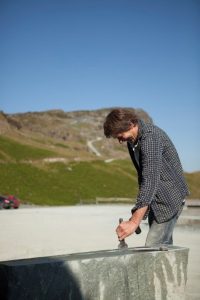 Joe Weir, working the clog to make the walling for the project

As the countdown to this week’s re-opening of the A591 continues, one team of local craftsmen has turned to England’s last working slate to help add some of the finishing touches to the vital repairs.

Around 20 tonnes of Honister green slate has been used by Keswick-based Stephen Edmondson Ltd to help with two key projects; to craft the stonework for an underpass at Swirls car park alongside Thirlmere and to help create a newly-opened multi-user trail for cyclists, horse-riders and walkers alongside the main road.

Stephen has had a team of up to 12 men working on the flood-hit area since early February. Since the opening of the new cycling trail last week, they have been focusing on special coving for the underpass.

He says, “We always want to use local materials wherever possible, so it seemed obvious to use authentic green slate extracted from an iconic Lake District mountain. As stonework specialists, we try to keep traditional skills alive and that fits really well with the ethos of the age-old techniques used at Honister to extract large blocks of stone from the mountain.”

Joe Weir, Co-owner of Honister Slate Mine, adds, “It seems fitting that slate formed by the forces of nature 450 million years ago is being brought into the daylight for the first time, to reinforce this important route through the heart of an iconic landscape. Now the slate is on public display, I believe it will stand the test of time, with people admiring it for many generations into the future.”

Formed in a rugged corner of the Lake District millions of years ago, Honister slate is renowned for its olive green hue, quality, longevity and density. It has even been used on the roof of Buckingham Palace.